Organising my life with an app

It feels a bit hypocritical to post about an app so soon after I posted about managing a screen addiction. But not very. I guess the point of my other post wasn’t that I didn’t want to use my phone. I wanted the interraction with my phone to be meaningful, and valuable.

In the last few years I’ve found myself to be very easily distracted, and I forget what I need to get done. Not big picture stuff, so much, but with smaller things. I’ve tried paper lists. I really, really wanted to be able to do paper lists with neat handwriting and big flourishes when I got to cross things off as done. Unfortunately it’s become clear that it just doesn’t work for me in the long term. On my phone, I’d tried Trello, and Evernote. Both seemed like they would do the job, but neither of them did.

I needed to try something else.

The next thing I found was Todoist. So far it is really working. I’ve been using the premium version for a couple of months now, and it is really excellent. I’m going to avoid sounding too much like an ad here, but with Todoist, you can add items to your list using natural language for categories, priorities, due dates, and recurring items. For example: “Take Out Bins every tuesday at 1900 #chores p1” will set a repeating item called “Take Out Bins” every Tuesday at 7pm, categorised as “chores” with a high priority. The desktop app is good too, for setting up your recurring events and doing all the things that are tedious to take care of on your phone.

I’ve added my standard house chores to it, spread out a bit over the week as repeating items. Basic stuff – vacuuming, dusting, laundry, mopping, cleaning bathrooms. A lot of chores are in there. Then I have some one-offs in there that come and go. 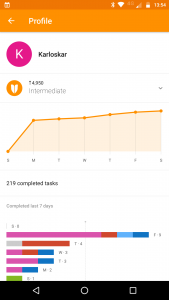 I still put things off. I still have things that are long overdue on my list. Those frogs don’t always get eaten first thing, but there are gentle reminders that I still need to do them. So, in the end, they do get done rather than fall off the todo list and finally forgotten.

The developers at Todoist have also gamified your todo list. It’s not important to me. Or not very important, at least. But having a few graphs showing a rough approximation of my productivity over the last week is nice. The app would be just as good without it, but it’s a bit of a bonus feel-good.

So, in essence, since getting Todoist, I have a cleaner house and less frustration because of forgotten tasks, and I like it.